A Tribute to our Founder

Dad grew up during a very exciting time in our community.  It  was the golden era of Bangor’s history,  when the slate quarries were in full swing and everything “ big” that was happening around town had something to do with slate.   Either you worked directly for a slate company or your livelihood depended greatly upon the prosperity of the numerous slate companies operating at that time.

As a young boy,  dad would spend hours watching the slaters  skillfully quarry the slate blocks  far below the earth’s surface.   It was not a safe place for a young boy,  but he would  find himself there anyway despite the very loud protests of his parents.    Little did he realize that his fascination with the slate quarries would eventually lead him to  start one of his very own later in life.  It was somewhere  in the early 1950’s while digging out some shale for a road repair on his farm that he discovered slate. This was all that it would take to rekindle his earlier interest in slate quarrying he once  had as  a little boy.  It would be a slow process and many years of hard work before he eventually hit good slate.  Although he only had an 8th grade education, he was very skilled  with his hands  and extremely clever.    He made many of his own specialized tools to work slate, learned how to operate heavy equipment and built the workshops he needed to accomplish his goal of owning and operating his own slate company. 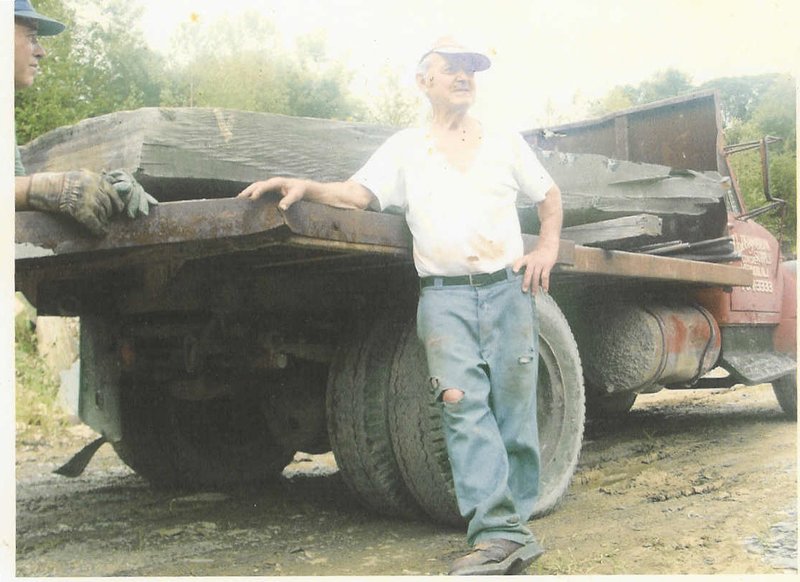